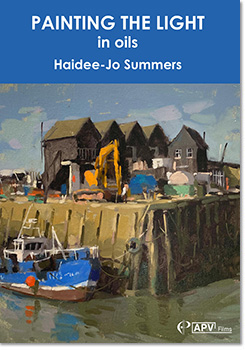 Painting The Light In Oils

Haidee-Jo is a professional artist who specialises in painting in oils. She paints as much as possible en plein air capturing the effect of the light in her subjects with the use of tone and colour. Her excitement upon finding a new subject is palpable and she shows us how to simplify complicated scenes onto a painted surface.

In this film her subjects include the harbour at Whitstable, a fabulous houseboat in an old boatyard with its own little garden, a scene looking through a barn door into the bright sunlit garden beyond and a stunning interior with the light shining through into the room. Although the main purpose of art demonstration films is to be instructive, a degree of entertainment helps as it retains the viewers interest and makes watching a pleasure much more than a chore. APV have always been good at this, but here have an added bonus in the presenter. Haidee-Jo is not just informative and entertaining, she is also highly engaging and time spent in her company is a joy that seems to pass all too quickly. Perhaps her greatest quality is to be able to keep up a running commentary as she works that is not just a description of what she is doing (we can see that), but why, and how decisions are made and directions taken. Some artists paint in almost complete silence, dropping the odd bon mot from time to time and we should not criticise that  the ability to keep up a patter is something you either have or you dont. All of which is to say that this is a thumpingly good film youll probably get a great deal from, even if you never have the intention of touching oil paint. There are four demonstrations. The first is a boatyard filled with possibilities, prompting a discussion of subject selection and simplification. We are also introduced to the relationship between colour and light, as well as how to deal with shadow. This is developed further in the second section, a garden view seen through a dark barn, where the final addition of a dash of bright red to the handles of a half-seen wheelbarrow brings things not just together, but to life. Its perhaps one of the shortest and simplest lessons Ive seen in any film. The third demonstration is at Whitstable harbour and includes buildings, boats, sea and sky. Its instructive to observe how Haidee-Jo omits much of the latter two elements because they dont contribute to the story. This is a theme that recurs throughout the film, the idea of a narrative being central to her work and contributing to composition, colour choice and perspective. The final painting is an interior filled with dappled light that changes as the work progresses. Its here that the importance of an initial reference photograph comes to the fore and Haidee-Jo explains how to use it to ensure consistency as the work progresses. Its a difficult painting that leaves her physically exhausted, but an intriguing exercise to watch  youre rooting for her just as you would the hero of a thriller. My notes are full of quotations and I seem not to have included any here, but lets sum up: Its only paint, I can change my mind; If you get into a muddle mixing colours, just think of the three primaries; What people respond to is the way you feel; I dont want it to be the same colour  its OK to be the same value. Finally, to conclude: Im a great one for saying, say what you want to say then get out. At which point, so shall I.