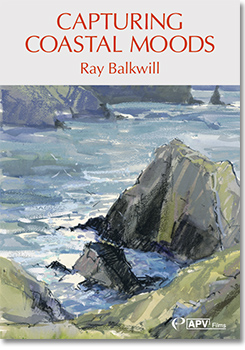 
Ray takes us to some of his favourite haunts on the spectacular coastline of Cornwall and demonstrates his unique approach to painting using watercolour and pastel combined. Stunning locations include Porthleven Harbour, the estuary at Gweek and the rugged cliffs of Mullion Cove. He is a strong advocate of painting en plein air, his main objective being to capture the mood and spirit of a place. He also shows how sketching in charcoal plays a vital role in capturing the essence of a scene. 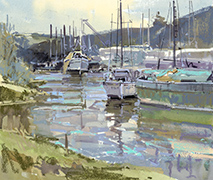 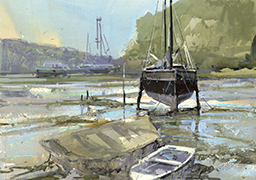 The title of this give you an implicit hint as to what it isnt. Its not a guide to painting maritime subjects. How so? Well, as Ray tells us at the beginning, Im a great advocate of working on location. A sense of place is important, not just to capture what I see, but what I feel. And thats the essence of what hes demonstrating here: its not the coast, its the mood. He continues, Ive painted here a few times. Its that connection with the place thats important. Its a theme that pervades the entire film and, since were quoting, heres another: Im not looking to make an accurate representation, Im looking to make a picture  as long as it looks like a boat, Im happy. (Ive conflated two things, there, but you get the er picture).

Ray is known as a mixed media artist, but Im going to burst another bubble while Im on a roll. Hes not. What I mean is that he doesnt paint mixed media because thats how hes pigeon-holed himself. Hes not really a media man at all. Yes, he uses pencil, felt-tip, Conté, pastel and gouache, almost always in that order, but only because theyre what he needs for a particular effect. Its more like a conductor bringing in the various parts of the orchestra to provide tone, shade and colour  highlighting the violins here, backing them up with woodwinds and cellos, adding colour with the brass and then using tympani to bring the whole thing to a crescendo. I should also say that Ray not only makes this look the most natural thing in the world (you may even conclude that using only one medium is to restrict yourself quite unnecessarily), but also easy. It isnt, of course, and its his supreme confidence and virtuosity that allow him to achieve what he does.

Youll notice that I havent once mentioned the subjects that Ray paints here. Thats deliberate as I think that to describe this film factually would be to miss the point entirely. This isnt about what Ray paints, but how he does it and theres a degree of alchemy to that. There are, though, five full demonstrations, all filmed in Cornwall, as well as a studio-based postscript which includes a look at a painting worked up from a sketch done in unpromising conditions in Gweek boatyard.

Watching the new Poldark series on television has reminded me of how magnificent the Cornish coast is. This new DVD by Ray Balkwill captures that magnificence perfectly using his unique method of combining watercolour and pastel in one painting. Ray believes strongly that in order to capture the character of the place, its important to paint in situ. Locations featured include Porthleven Harbour, the estuary at Gweek and the cliffs at Mullion Cove. Its inspiring to watch Ray at work and to take away with you some of that magic yourself so that you can capture your own coastal moods. As with all APV Films, the quality of the film is excellent.THE ARTIST - May 2015

Two words that appear repeatedly in this enlightening film sum up Rays approach to painting: shape and emotion. He also talks about shape in relation to composition and to the way the colours appear. Ray is often described as a mixed-media painter and its true that he works with pencil, pastel, felt-tip and gouache, often in quite specific order. However, this is not to follow a specific technique or genre, but rather as a composer uses all the instruments of the orchestra to create tone, colour and body. Ray makes it look easy, but theres a lifetime of experience that brings the confidence to take risks.

(10/10)  Submitted by: David Barr 31-Oct-2014
I thoroughly enjoyed this dvd, the skill,technique and instruction given by Ray is superb added to this the excellent venues. Thank you Ray and APV