David is a great exponent of painting winter landscapes, particularly under snow. Filmed in the Brecon Beacons and North Staffordshire, we see him on a winters day as he sketches alongside a canal and paints a cascading waterfall. He then finds some snow and paints a variety of subjects including cottages, trees, water and atmospheric skies. Finally, in the studio, he works up one of his sketches into a finished watercolour. 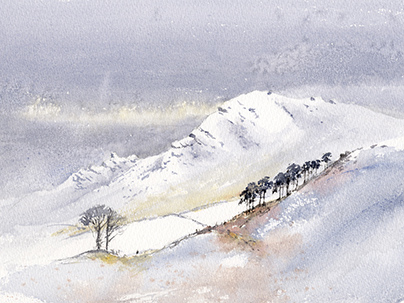 In winter, theres generally a bit more colour around and you get away from all those awful summer greens  and I dont think hes talking about cabbage.

Thats quite a challenging statement, especially as David is standing in a landscape thickly covered with snow at the time. Monochrome is the word that more obviously springs to mind. However, this is a film as much about overcoming preconceptions as it is about the process of painting.

If youve been following Davids career, youll remember that his earliest films were adventures and featured him hanging off ropes or clinging onto vertical surfaces like a mountain goat. All that was a lot of fun to watch, but it had less to do with the practicalities of what the rest of us would call the real world. Ive remarked before that its been noticeable that his recent work has been much more centred in valleys and thats true here. Even the opening demonstration, where he makes the remark about colours, is filmed at the roadside and all the locations in the film are perfectly accessible.

So, this isnt a film about investing in extreme-weather equipment and where best to source a distress beacon. Rather, its about wearing enough layers  actually, scrub that: its about painting, pure and simple. What David demonstrates is how to make quick sketches  one of the most successful, and also quickest, is done with a single Inktense block  either from the car or close to its refuge. Getting out in cold weather isnt about endurance, but practicality. Take a minimum of equipment and work quickly, make colour notes, concentrate on the main meat of the scene rather than too many details. Oh, and yes, do wear plenty of layers.

Because everythings done quickly, theres a good number of different demonstrations here and David does indeed show you how subtle winter colours can be  skies are rich with reds and yellows and the buildings of a moorland farm stand out against a snowy background instead of blending into it as they would in summer.

Demonstrations done, David returns to the warmth and shelter of the studio. Here, theres space to use stretched paper rather than a block, and not to have to worry about being able to keep hold all of your equipment while you work. Theres also time to consider composition and this becomes, for me, perhaps the most interesting section of the film. Remember that Inktense sketch? If you were watching closely, youll have noticed that David was already tightening up the relation of the two buildings in it. Now, he brings them together even more as a compositional unit, changes the way the foreground leads in and the background hills frame the whole thing. A previously non-existent piece of farm equipment also makes an appearance as a foil to the centre of interest and a useful splash of red to provide focus. This exercise isnt so much about painting in winter (though thats the subject) as about the authorial content of painting. If you wanted an essay that refutes Fox Talbots claim, relating to photography, that from today painting is dead, this would be it. You cant do what David does in anything other than a painting. Theres no viewpoint that would give you want he presents, which isnt a representation of the scene as it was, but of its element, its spirit. Its a bit of a masterclass, actually, and Id buy the film for this alone.

Complementing the book of the same title, David Bellamys Winter Landscapes in Watercolour is filmed in the Brecon Beacons and north Staffordshire in the difficult conditions of winter. From cascading waterfalls to atmospheric skies, snow-covered cottages and canal scenes, David shows you how he works in less than ideal conditions to capture the winter landscape around him. The final demonstration sees him working up one of his sketches into a finished painting back in the comfort of his studio. The DVD is the perfect accompaniment to the book; the book allows you time to study techniques in more detail, while the film has an immediacy that is exciting to watch.ARTIST - February 2015

Older readers may remember when Davids films were adventures and saw him in impossible locations, maybe hanging off a rope. Today, he paints in places accessible to those less inclined to be a mountain goat. This film finds David on a sketching trip in Staffordshire after a good fall of snow when theres generally a lot more colour around, even when the whole landscape looks monochrome. David draws and paints a variety of subjects and deals with problems such as a damp atmosphere, which severely delays the drying times. Once the snow is gone, he finds a tranquil canal scene and a secluded waterfall where he has to work quickly as the light fades. Back in the studio, with shelter and space for materials, David works an intense sketch up into a finished painting, applying considerable editorial input into the original scene to give a tight composition.