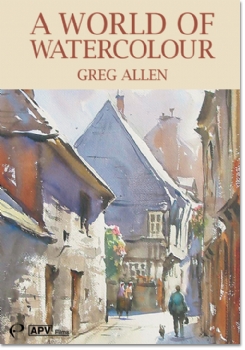 A World of Watercolour


Greg paints in a strong, loose and colourful way and his paintings contain elements of sound design and draftmanship and a crisp, direct technique. In this film he starts off with an initial session of techniques in his studio in Melbourne. He them demonstrates his method of painting, choosing views along the coast near his home. The second part of the film sees him travelling to France where he paints a street scene and harbour in the picturesque port of Honfleur in Northern France. Spontaneous watercolours
With his sunny Australian accent, and boundless enthusiasm, acclaimed watercolour artist Greg Allen, is a pleasure to learn from. In his latest film, A World of Watercolour, he starts by showing us what makes his medium special. He rapidly lays on colour, showing a range of techniques all on one sheet of paper. He then goes back and explains how these effects were achieved; using dampened paper to create softer finishes, or painting directly onto a dry surface to ensure a crisp edge. He moves from the mark making to create three- dimensional forms, showing how quickly damp paper can pull colour round to create the illusion of a three- dimensional cylinder or sphere. It is almost like magic! Its a lively and engaging start.

Over the course of the film, Greg completes four demonstrations. The first is a beach scene at Sandringham, outside Melbourne. Although not a particularly sunny day, he creates a painting that is full of contrast and colour. The second demonstration is again in Sandringham, but this time a more intimate view of a pathway running through sunlit trees. He shows how he creates bold sketches to first decide on his composition, and then how to lay in the main shapes and tonal values. Being a hot day, he needs lots of water, washing in colour, and then lifting out highlights with a flick of his fingernail.

The second half of the film moves to Honfleur in France. He zooms in on a section of the harbour, flanked by interesting buildings and set against the light. This provides the opportunity to learn how Greg so successfully captures water. Finally, he finds a characterful backstreet where he can explore the relationships of shapes within the historic architecture, accompanied by an organ recital in a nearby church!

By merit of planning carefully and keeping things simple, Gregs work always looks fresh and spontaneous. His aim is to help the viewer see the world through the eyes of a watercolour artist, which in Gregs case, are twinkling ones!

(10/10)  Submitted by: IanR 22-Mar-2012
A fine artist who is able to capture fleeting moments and changing patterns of light. Helpful commentary too, which helps to understand Allen's thought processes as he sets and then adapts his ultimate goal.

(10/10)  Submitted by: Nelson 3-May-2013
I think Greg Allen is an excellent artist, relaxed, with pedagogical skills (non-selfish) and a great sense of humor. His video helped me a lot. When can we expect the next?