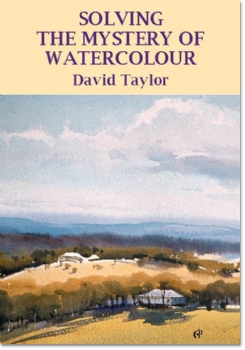 Solving The Mystery of Watercolour


David Taylor paints with passion, producing wonderfully atmospheric watercolours filled with light and colour. In this video, filmed in and around his home near Melbourne, Australia he paints a variety of different subjects. Practical tuition in his studio is combined with outdoor paintings of water, boats, buildings, sunlit streets and a panoramic view of the beautiful Australian landscape. APV Films is to be congratulated on securing the services of one of Australia's most talented and accomplished watercolourists and on producing an excellent video in which the artist, David Taylor, discusses his painting philosophy and demonstrates his methods. He has no interest in producing accurate, painstaking reproductions of his subject, being happy to leave that to photographers, but concentrates instead on capturing something of its atmosphere and character. This approach demands the exercise of considerable artistic licence and much simplification, but the results are far more telling and evocative than those likely to result from mere accuracy.

David Taylor is a firm believer in the virtues of the limited palette and for much of his work uses just five colours, and never more than seven. He appreciates the vital need for good watercolour paper, and uses large brushes, both flats and rounds, to obtain his bold effects, with a rigger and a No.8 with a fine, tapering point for detail.

One of the hallmarks of skilled watercolourists is their ability to handle hard and soft edges and here David Taylor excels. He sometimes sprays an area of his painting with clear water and paints soft, ethereal images on the damp surface, images that become progressively harder as the paper begins to dry.

He starts by showing how objects may be developed from simple geometric shapes and demonstrates how boats, cars and even human figures may be captured in this way. There follow six demonstration paintings, the first two in the studio, the remainder in the open air. The settings are mostly in Williamstown, a suburb of Melbourne and the first two are based on previously painted street scenes. He uses no pencil but goes straight in with the brush. His brushwork is quick and sure and I particularly liked the way he used a large flat to establish the bold pattern of the buildings.

In the second demonstration, the artist reversed the traditional method of painting from light to dark and established his deep-toned accents and shadows first, adding pale washes when these were dry. His glazes were so lightly and deftly applied that no disturbance of the underpainting resulted - no mean achievement.

The open air subjects were an attractive house and garden with creepers, potted plants and a woman's figure, a delightful rural panorama, a harbour scene with moored yachts with the skyscapes of Melbourne in the background and, finally, another Williamstown street scene. All were painted with skill, panache and evident enjoyment and the accompanying commentary was helpful and down to earth. Viewers will learn much from this 90-minute video which I recommend unreservedly.THE ARTIST - April 2003

Gaining confidence by practising techniques in the studio is a good idea because this allows you to work with greater freedom when you are painting on location. This approach is reinforced in David Taylor's excellent film, Solving the Mystery of Watercolour, which starts in the studio with a look at key elements, such as drawing, adding colour and choosing the right paper, but also includes four wonderfully free and atmospheric paintings made on location near the artist's home in Melbourne, Australia.

Watching David at work is inspirational and we would all do well to bear in mind his general advice about painting outside. "Don't get alarmed," he says. "Cover the big areas first and then work on the smaller ones." With subjects as different as a sunlit street and a panoramic landscape he shows how to develop a painting from initial washes to final accents of colour, while always considering what is important about the subject its light and mood.

(10/10)  Submitted by: SusanB 7-Aug-2019
I own dozens of watercolor instructional DVDs and this is... by far... the best one that I own. In addition to liking David's paintings and style and attitude, I found that his running commentary as he painted - explaining why he was doing what he was doing - to be invaluable. First class instruction and top quality production of the DVD.